Design a site like this with WordPress.com
Get started

In 22th August our Foundation took us in Stadium. In this amazing new Silesia stadium in Chorzów, during the memorial of Kamili Skolimowskej ( a young hammer throw was only 26 years old, she left prematurely due to pulmonary embolism) 500 Olympic athletics have competed in several athletic endeavors ( high jumping, discus throw, shot-put, javelin, hammer throw …) It was possible to enter for free and it was more than 40.000 persons. This is the first time in a stadium  to see athletic challenge. The first impression was to be very little in this huge space, the second was to feel the involvement at effort of athletes. Natia was more involved than me and she screams loudly in Georgian every body watch us. At the end a couple in front of us decide we were too noise for them. “Ehi guys you are in a stadium not in theater!!!” 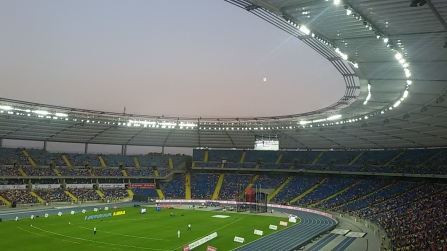 Natia had an interrogative face asking why polish people are so quite. It was very funny. I think Georgians cheer from the deep of their soul. I can not image what happens during a soccer game. But maybe we could have the chance to know it.